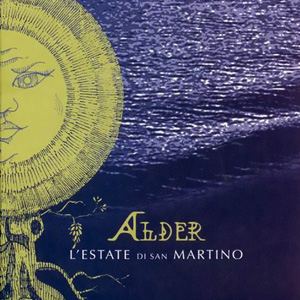 A group from Perugia with a very long story, that sadly did not leave any recordings until today. L’Estate di San Martino was created back in 1975 to provide the musical background to a theatre play; in 1978 the group took part in a contest, reaching the final show in Capri and winning the chance of recording a single for RCA. The record was then released, but only as a promotional and with another group on the back side. In the following years the line-up became stable with the addition of new musicians to enrich the sound, with use of keyboards, electric guitar and drums, and the group had an intense live activity mostly in Umbria, with shows based on concept projects, and long tracks with large instrumental parts.

We have found one of their recordings from 1983 and we’re very happy to say that “Alder” is a really beautiful concept album, with good italian vocals. Available in the usual deluxe AMS papersleeve CD release, featuring a pleasant and dreamy melodic italian prog, sometimes close to Genesis, but also Celeste or Locanda delle Fate. The CD features a nice bonus track, plus a booklet with extensive liner notes and lyrics.