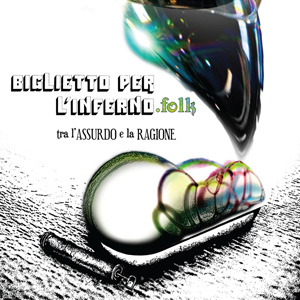 “Fra l’assurdo e la ragione” (between absurd and reason) comes 35 long years after the namesake debut album of one of the most legendary Italian prog outfits ever!

Featuring original band members Pilly Cossa, Baffo Banfi, Mauro Gnecchi, and blessed by the approval and contributes of singer/lyricist/flautist Claudio Canali – famous for having retired in a monastery, in strong contrast to the hateful verses he wrote when playing in the original Biglietto per L’Inferno line-up – this release is far more than a simple collection of newly recorded old tracks: the band’s classics have been re-arranged – therefore the suffix “.folk” has been added to the band’s name.

Together with the collaboration of young talented north Italian folk musicians and a great female singer, Il Biglietto per L’Inferno transform their classics to a new, shining life. Also, apart from the classics, the album also features one previously unreleased song composed by Claudio Canali!!
Highly recommended!