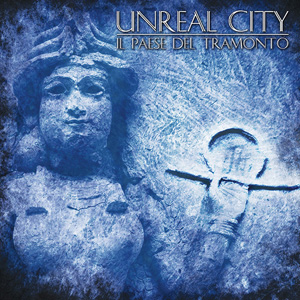 A bit more than a year after the release of their debut album “La crudeltà di aprile”, Unreal City are back with a second LP called “Il paese del tramonto”: another concept album, a long story about a revelatory dream which develops throughout seven tracks for a total length of 70 minutes, perfectly following the ‘progressive tradition’. There are many philosophical and literary references, as well as instrumental passages, which maintain that gothic and dark aura that characterized the debut album.

Meanwhile, the band has grown and matured particularly on stage, having performed no less than in Canada in April 2014 at the Terra Incognita Festival, and is already working on their next international appearances. The studio line-up is the same (the original drummer has recently been replaced), with the histrionic singer/keyboardist and composer Ema Tarasconi in pole position; moreover, Rox Villa’s Hilary Studios, located in Genoa, where the album has been recorded, are a quality guarantee since years.

“La crudeltà di aprile” was a bolt from the blue in the Italian progressive rock scene, and we can ensure that its follower will not disappoint the expectations of those already fond of the quartet: it is actually intended to thicken the ranks of these promising young musicians’ followers!