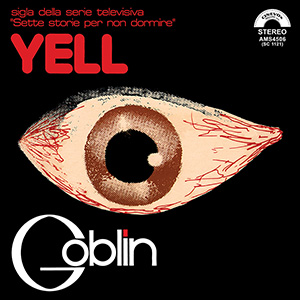 Inside the vast Goblin archive, “Yell” is perhaps one of the less well-known tracks, that undoubtedly deserves no less attention that the band’s most famous works. It’s a song composed for bass guitar, percussion and keyboards where an opening reminiscent of “L’alba dei morti viventi” is followed by a sudden vibe change, due to the quick entrance of all the other instruments: electric piano chords, a pulsating bass, obscure synths and twisted keyboards still preserve that mix of tension and and darkness that made Goblin unique in the soundtracks area.

The song was composed on commission at the end of 1978 to be used as the intro theme for a series of seven TV thriller/horror movies called “Sette storie per non dormire” (a title that could be translated into “Seven stories that won’t let you sleep”) that was broadcast in the autumn of the same year by the Italian Rete 2 RAI channel; taking advantage of the success of the series, Cinevox Record decided to release “Yell” on a 45rpm that included, as B-side, the song “…e suono Rock” taken from the album “Il fantastico viaggio del Bagarozzo Mark”.

The original edition of “Yell” is today one of the rarest Golbin releases, and is exclusively reissued for the first time ever by AMS Records on red vinyl, for the Record Store Day 2019 event. Not to be missed!

Side B:
…e suono Rock